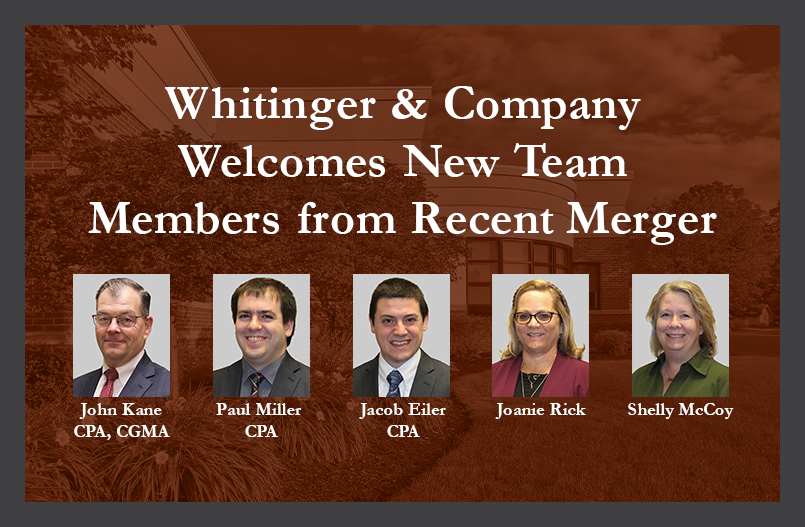 Public accounting and advisory firm Whitinger & Company LLC has added five new staff members from their recent merger with J.P. Kane & Co.  Four individuals will be joining the firm’s Fishers, Indiana office while one will join the Whitinger team in Muncie.

John Kane, CPA, CGMA has more than thirty-five years of professional experience, including three years in the banking industry before beginning his distinguished career in public accounting. John received his CPA certificate in 1989 and founded J.P. Kane & Co. in 1997 where he grew it to be one of the most respected public accounting firms in East Central Indiana. Upon the merger of J.P. Kane & Co. into Whitinger, John became a Member/Owner of Whitinger & Company and leads Whitinger’s office in Fishers, Indiana.

Paul Miller, CPA graduated from Ball State University with a bachelor’s degree in accounting and a minor in human geography in May 2017. He then went on to pursue a master’s degree in accounting and moved to Anderson, Indiana after graduating college. As a Senior Accountant with Whitinger & Company, his responsibilities include accounting, auditing, consulting and tax compliance services for small businesses, individuals, and nonprofit organizations. Before joining Whitinger’s Fishers office, Paul had worked at J.P. Kane & Co for the past four years.

Jacob Eiler, CPA graduated from Anderson University with a degree in Accounting and Information Systems in 2015. After graduation, Jacob worked both in industry and public accounting and received his CPA certificate in 2018. Before joining Whitinger’s Muncie office, Jacob had worked at J.P. Kane & Co for the past four years. As a Senior Accountant with Whitinger & Company, his responsibilities include accounting, auditing, consulting and tax compliance services for small businesses, individuals, and nonprofit organizations.

Joanie Rick has joined Whitinger’s growing Bookkeeping & Payroll Division. Her responsibilities include bookkeeping, payroll, accounts receivable, accounts payable, cash flow management, and bank reconciliations for business clients of the firm. She is also responsible for numerous payroll clients, including processing their weekly/bi-weekly payrolls, which included all monthly, quarterly, and year-end reporting. Before joining Whitinger’s Fishers office, she was with J.P. Kane & Co for seven years.

Shelly McCoy is an Anderson native with many years in administrative leadership, particularly within public accounting. In her role with Whitinger as Office Manager, Shelly provides leadership for the daily administrative operations of our Fishers office. She uses the knowledge gained from her previous work experience to oversee our front desk staff and coordinate with the firm’s operations team in Muncie. Before joining Whitinger’s Fishers office, she was with J.P. Kane & Co for the past twenty years.

In addition to the five full-time associates joining Whitinger, industry veteran and long-time Anderson-area CPA, Erv Rockhill will lend his expertise as a part-time consultant. To learn more about Whitinger & Company and their recent merger with J.P. Kane & Co., please go to MERGER on the Whitinger website.